Two types of medicine are being practiced at the Butaro hospital in northern Rwanda; one treats diseases of infection, the other treats the disease of poverty.Using local building techniques, materials, and labor, construction of a new hospital building is now underway  in northern Rwanda’s Burera district, near the border with Uganda.Lush terraced hillsides, subsistence farming, and Lake Burera dominate the one hour drive from the nearest paved road – less than 15 kilometers as the crow flies. 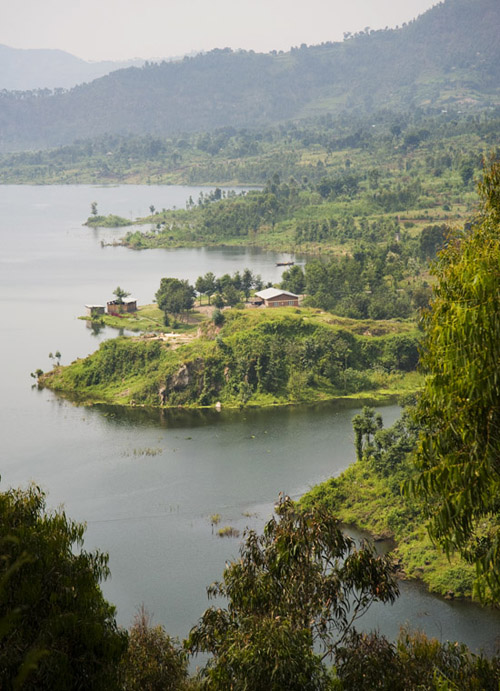 In a joint venture with the William J. Clinton Foundation, and Rwanda’s Ministry of Health, the Boston based Partners In Health (PIH) is overseeing the building of an innovative hospital designed to control infectious diseases like tuberculosis, as well as nosocomial (hospital-induced) infections common to hospitals in sub-Saharan Africa.” 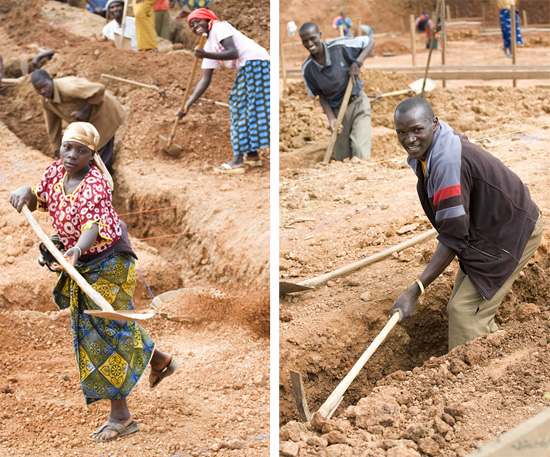 With a local contractor, and a construction crew hired from the local population, PIH is implementing their proven model of community-based care to serve a population of over 500,000, in a region reaching from northern Rwanda to southern Uganda.PIH fundamentally believes health care is a right not a privilege. Community-based care is based on five fundamental principles[i]:1. Access to primary health care, 2. Free health care and education for the poor, 3. Community partnerships, 4. Addressing basic social and economic needs, and 5. Serving the poor through the public sector. 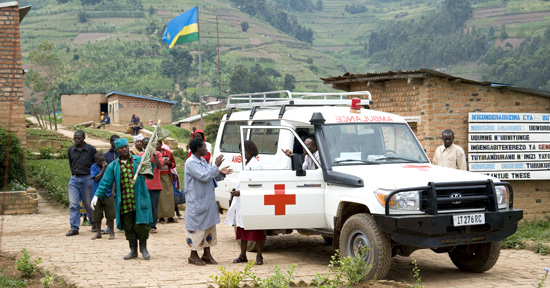 An existing facility, in the process of being updated, treats the three most common ailments – upper respiratory infections, malaria, and gastro-intestinal problems. It also includes maternity, pediatric, HIV/Aids, and other treatment wards.  Equipped for x-rays, minor surgeries, C-sections, and physical therapy, the present hospital can handle most medical issues.Conditions requiring major surgery are transferred to larger facilities. 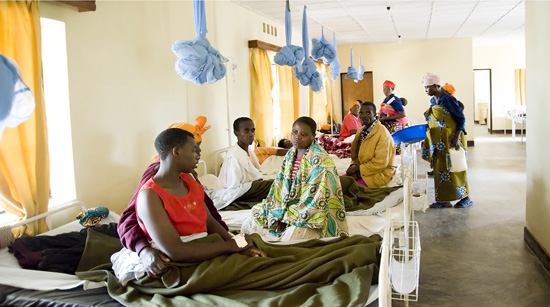 Butaro’s  new hospital building was conceived by a team of architects from Harvard’s Graduate School of Design, working in conjunction with PIH.  Lead architect, Michael Murphy, began preparations after being contacted in 2007 by Paul Farmer, the founder of PIH.Farmer challenged Murphy to generate an architectural solution to the medical problem of infection transmission in sub-Saharan Africa.Of particular concern, halting the spread of recalcitrant airborne infectious diseases, such as tuberculosis, where a patient can come into the hospital for an easily treatable condition like a broken bone or the stomach flu, and leave with TB. 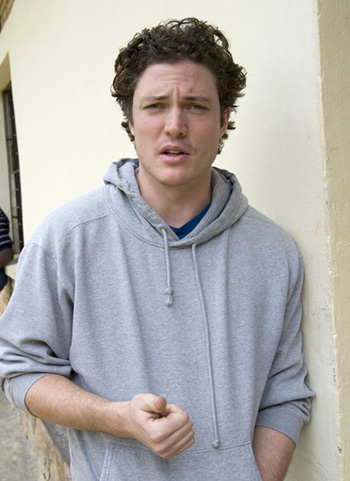 “The problem of airborne disease in developing countries is so huge and complex that a multidisciplinary approach is the only way to address these issues,” states Murphy. “We believe that architecture can save lives through effective healthcare design.”[ii]The Butaro project inspiredMurphy, along with ten other students, to  form the non-profit MASS (Model of Architecture Serving Society), in January 2008. 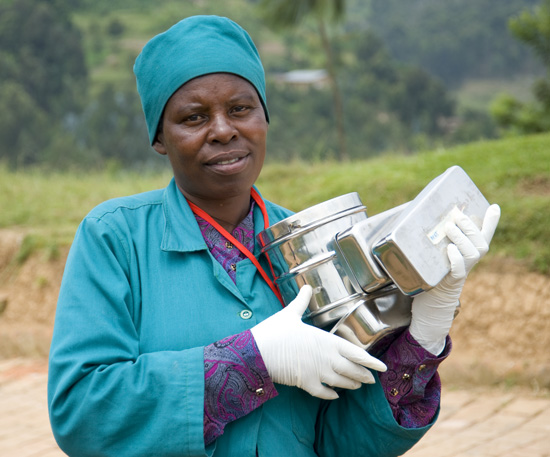 Rather than depending on high cost and high energy intake methods like the negative pressure air evacuation systems more common in wealthier countries, the new Butaro hospital relies on simple design features to reduce the spread of airborne pathogens. Open wards with natural ventilation allow air exchange rates on par with western hospitals. A hill top cite provides the advantage of increased wind and air flow, and high permanently open windows amplify ventilation.Interior hallways, where close patient to patient contact is frequent, are eliminated.Exterior walkways and courtyards with wards built around the perimeter also reduce the risk of disease transmission.

Eloquent solutions, appropriate technology, and determination are all in play, but the design and it’s structural endpoint are only the beginning.Construction techniques and applications are the unexpected story.In a country where 60% of the population earns less than one U.S. dollar per day (88% earns less than two dollars per day),[iii] the Butaro hospital project directly treats the disease of poverty.All labor comes from the local population where subsistence is a way of life, and a full stomach is never guaranteed.Typical of Rwanda, people living in this area have no electricity and no running water. 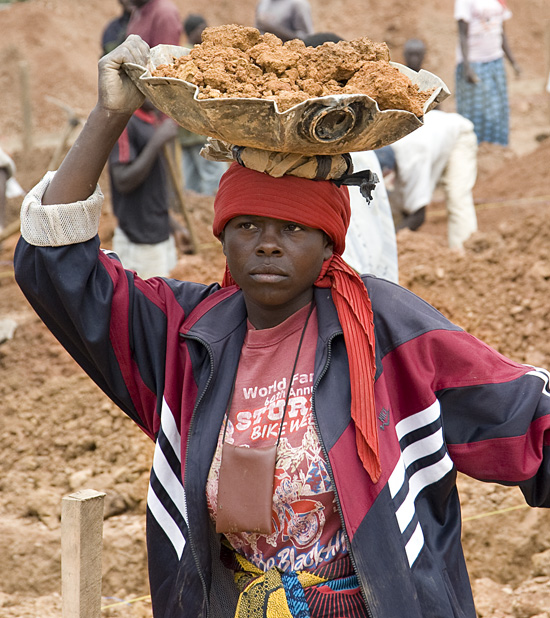 The construction crew works in one week shifts, then a new group comes on.Work groups cycle once every six weeks, spreading employment to six times as many people than if only one crew were hired.Local building techniques are the rule; earth moving machinery is all but absent.Foundations are dug with pick and shovel. Dirt is removed on foot, in large bowls atop a woman’s head. 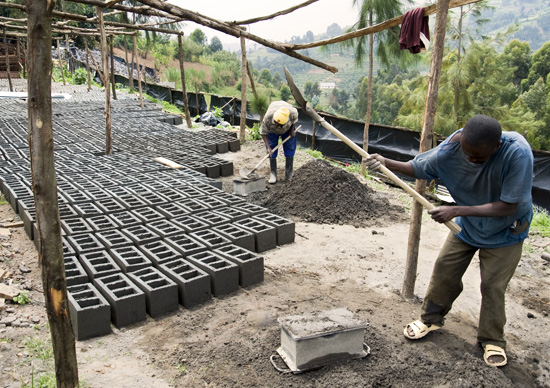 Cement is mixed by hand, and cinder blocks molded and driedon location. Furniture and other finished wood products are constructed on site. Anything that can be dug, mixed, cut, formed or fashioned into shape is done by the local people with local means. 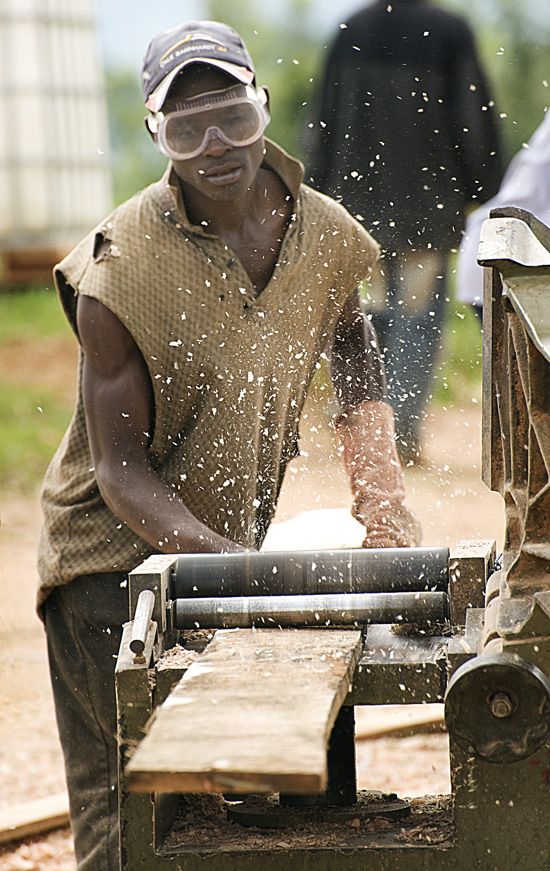 Meals are fed to all, clean drinking water is readily available, and health care and education are provided.Construction of the new hospital is as much about development and poverty reduction as it is about improved health care. Work is one of the treatments.

“It’s a clear example of how you could rehabilitate an entire community by investing in one infrastructure.” Michael Murphy. 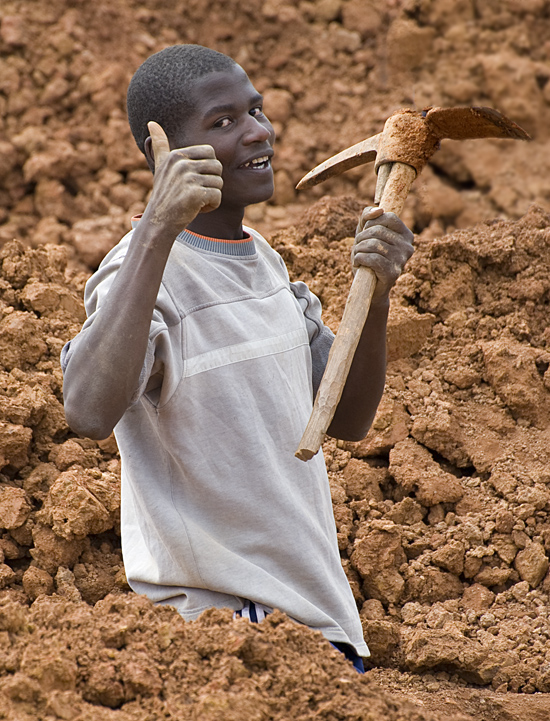 All photography copyright 2009 Adam Bacher.  Absolutely no usage without prior authorization.

[i] Partners I Health, http://www.pih.org/what/PIHmodel.html