Home/Children and Orphans, Rwanda/Child Soldiers – Lost Youth in the Congo
Previous Next

In times of armed conflict, children are among the most vulnerable – as victims, hostages and worse.During the genocide in Rwanda, one million people were killed in the span of one-hundred days.The killers did not discriminate;men, women, or children, any who were identified as from the “wrong” ethnicity were killed.

With the fall of the genocidal regime, perpetrators (genocidairs)and organizers of the atrocities (Interhamwe)fled Rwanda to avoid prosecution, along with large numbers of the population who feared retribution.

The Interhamwe quickly began to recruit militias; they reorganized as rebel forces operating over the northwestern border of Rwanda in the Democratic Republic of Congo, formerly Zaire.Large numbers refugee Rwandan children were recruited and forced to take part in new attacks and atrocities, carry loads of ammunitions, work as messengers, and cook and assist in other tasks.

For rebel groups, child recruits are seen as the most expendable. Easily manipulated, children were forced to commit some of the most brutal atrocities including the rape, maiming and slaughter of victims. If they refused to take part they were killed. Over time, many child soldiers have escaped and returned to Rwanda. In other cases, Rwandan army units liberated them. To date, child ex-child combatants that have returned to Rwanda number in the hundreds, with an estimated 2,000 remaining in the DRC soldiering for Interhamwe groups against their will.

In February, 2004, the Rwandan Demobilization and Reintegration Commission, opened a Child Ex-Combatants RehabilitationCenter, an hour’s drive east of Kigali. This week we were invited to tour the facility.Situated in a wooded setting near the shore of lake Muhazi, the center in on the grounds of a former military training camp. It had a feeling similar to that of many summer youth camps I’ve seen in the United States. 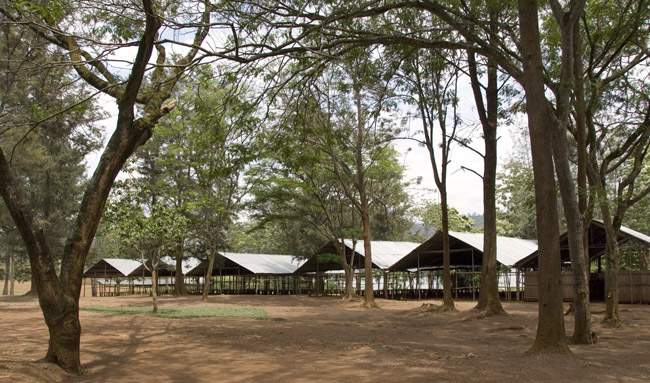 Take away the mosquito netting, and the bunk house bore resemblance to a rustic youth camp; beds made and lined down the wall, clothes hanging from the headboards, tennis shoes and sandals on the floor, drawings tacked to the walls, boxes with personal goods next to or underneaththe beds. 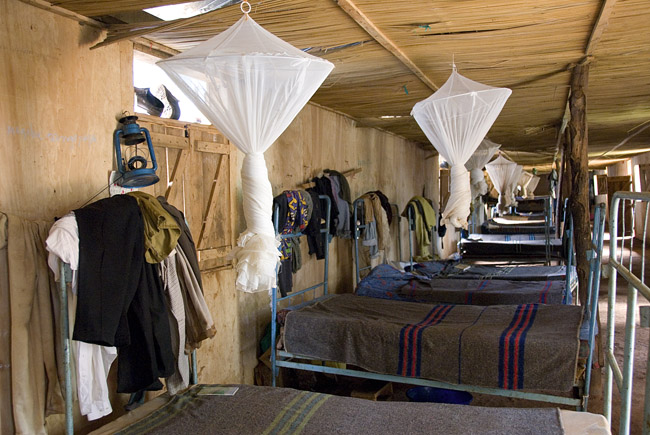 The goal of the facility, according to a paper we were given entitled “Confronting the Challenges,” is to “diligently respond to the need for these children to be repatriated, rehabilitated, reunited with their families, and reintegrated into main stream society, thus restoring their right to enjoy their childhood and grow up into responsible citizens.” When I asked about the current group, I was told they had a population of 36 kids, two of which were under 10 years old, the bulk between 12 and 17. I’m usually good at staying dispassionate on photo shoots, however it was hard for me at this location. I had trouble getting the thought out of my mind that some of these kids were the same age to my two daughters, 11 and 13. A problem compounded when I started hearing the list of atrocities many of them had been forced or seduced into committing.

One of the conditions of our tour was that I would not publish any photos of the children’s faces. Most looked very hardened, a few soft and innocent. They wore the same khaki color uniforms of public school children. I had hoped to see and photograph them during their daily classes and activities, however, we met only at the end of our tour. The kids were grouped together in a covered area seated in rows on benches. Six of the older children greeted us with a traditional Rwandan dance.

The facilities’ social psychologist gave us with a brief overview of the of center and it’s philosophical approach. Rehabilitation includes, among others: psycho-social support, art therapy, civic education, literacy and numeric teaching, socializing and life skills activities, and community sensitization and advocacy done in the communities where the children will be reintegrated. On the walls around him were examples of the typical progression of art from when the children arrive to when they leave. The pictures in the photo behind him were common to new arrivals, depicting scenes of guns and battle. 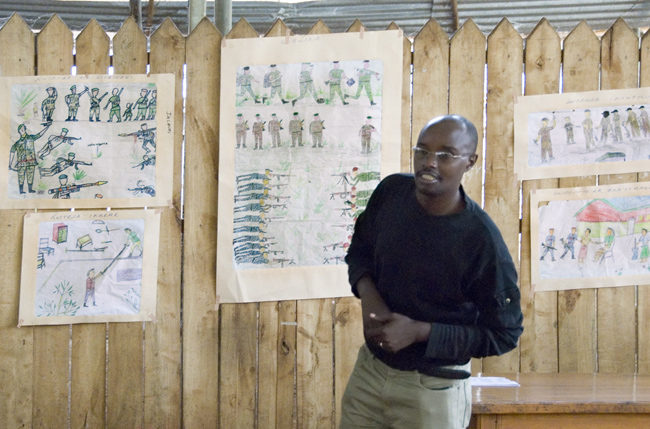 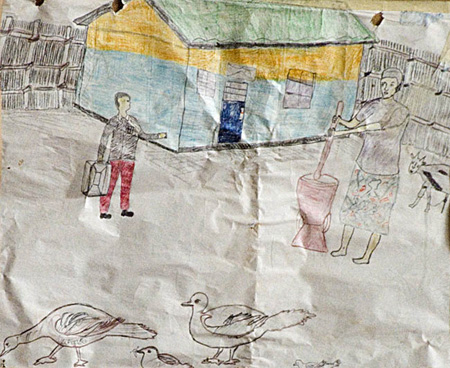 When Victoria Trabosh, President of the Itafari Foundation, addressed the group she used phonic flash cards to teach some english words. With her sense of humor and masterful interpersonal skills, I watched the tough and closed looking group briefly show their child side with laughter and boyish smiles. 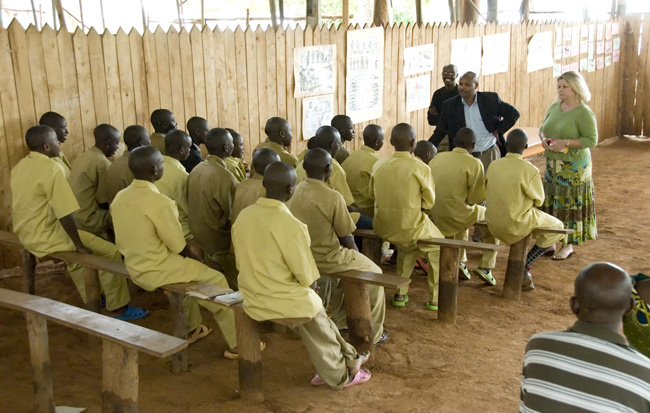 All images copyright Adam Bacher. All rights reserved. Absolutely no use without prior authorization.